skip to main | skip to sidebar

Kadappattoor is a small beatutiful village situated on the banks of the Meenachil River near Pala in Kottayam District. Kadappattoor Mahadeva Temple is the important landmark of this village. Devotees can reach this temple either through Kadappattoor bridge near Pala Kottaramattam Municipal Bus Stand or through Pala Catheedral Church - Kadappattor Temple road near to Pala Valiyapalam (town bridge). 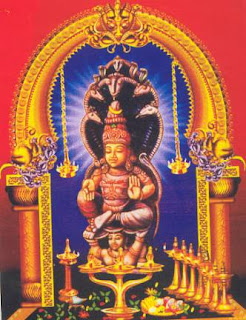 The legends of Kadappattor temple is aasociated with Sage Gauna. According to legends the Meenachil river starts from the Kamandalu of Gauna Maharshi like the river Kaveri from Agasthya Maharshi's Kamandalu. Hence this river got the name Gauna Nadi. Gauna Maharshi filled his Kamandalu with Sapthanadi Theertham (water from the 7 holy rivers - Ganga, Yamuna, Saraswathy, Sindhu, Narmmada, Godavari and Kaveri). A beautiful idol of Lord Subrahmanya was also kept in his kamandalu. He was eagerly waiting for the Darshan of Lord Sree Rama in his return journey to Ayodhya after killing Ravana. Sree Rama was accompanied by large number of devotees like Vibhishana, Sugreeva, Hanuman and Angada in the Pushpaka Vimana. So Maharshi Gauna could not see Lord Sri Rama and Sita Devi properly. So the angry Gauna threw the kamandalu away and the idol of Subrahmanya Swami came out. These incidents occured on a hill and since then the hill is known as Kudamuruttimala. This flow of water became a river and thus the present Gauna nadi was formed. Along wih the flow of the water, the idol was carried away to the Vishnu temple in Kidangoor and was later installed in a new sreekovil. This is the present Kidangoor Subrahmanya Swami Temple. So the water in Gauna river is as holy as the Sapthanadi Teertham. 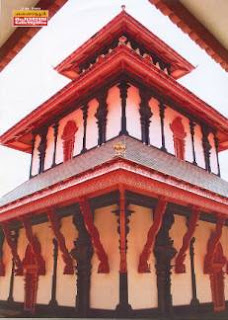 The emergence of Kadappattoor Mahadeva temple is a wonderful incident. After thousands of years, the idol of Shiva was discovered by a woodcutter named Madathil Paachu Nair from inside a large Athi (Country Fig - Ficus Glomerata) tree on the banks of Meenachil river on 14th July 1960 while he was cutting fire wood. The day was quite unusually stormy with deafening thunder bolts. When half of the tree was cut, the tree fell to the opposite side. Pachu Nair got quite frightened and became unconscious as the tree fell to one side and the stone idol of Lord Shiva appeared from that. The news of appearance of a beautiful Shiva idol from the tree spread like wild fire through central Travancore and people flocked to see the idol. Later a temple came up with the efforts of Bhaktas. Initially the temple had a unique architecture resembling North Indian temples. Gradually Kadappattoor has become an important pilgrimage center in Kottayam district.

The Devaprasnam conducted in the temple revealed that Lord Mahadeva is unsatisfied with the architecture of temple. Hence the temple authorities decided to renovate the temple and consulted Brahmasree Kanippayyoor Krishnan Nampoothirippad to remodel the temple structure. The renovation works were completed in 2006 and Naveekarana kalasam was performed in March. Now the temple has a three storied big rectangular sreekovil with copper covered pyramidal roof and golden thazhikakkudam. The sreekovil walls are decorated with sculptures. The namaskaramandapam also has a copper covered pyramidal roof and golden thazhikakkudam. 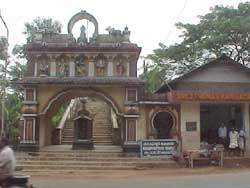 Kadappattoor temple is an important Idathavalam (pilgrimage shelter) for the Sabarimala pilgrims. Thousands of pilgrims visit the Kadappattoor temple, every year, on their way to Sabarimala. Elaborate arrangements are provided for the pilgrims by the temple authorities. Alangad Sangham, a major participant of famous Erumely Pettathullal (a devotional dance, performed by the pilgrims) will rest here for a day on their way to Erumely. They will perform the Paanaka Pooja at this temple on Dhanu 26th (January ).

The Nagagandhi tree near the western gopuram attracts the devotees. This tree is very rarely found in temple compounds. You can see a small Shiva Linga inside the flower. Another speciality of this temple is that the Arattu kadavu is situated very close to the Eastern gopuram. People belonging to all religions are allowed to enter into the temple.

Every year July 14 is celebrated as Vigraha Darsana Dinam. On that day there will be Akhanda naama japa yajnam from early morning. Tantri Paramboor Bhattathiri will perform the Vigraha Darsana Pooja at around 2 pm and will open the sreekovil doors for Darsan. Thousands of devotees from near and far will come here to have a darsan of Lord Kadappattoorappa. There will be a Maha Prasadaoottu for devotees.

The ten day long annual festival is in Meenam (March - April). Pathamudayam (Medam 10) and Shivarathry are also celebrated. Thousands will offer Vavu bali on the banks of the Meenachil river, near the temple on Karkkidaka vavu day. Men, women and children will throng the temple from early morning to perform Pithrukriyas. On Aayilyam day in Kanni and Thulam months there will be Aayilyam pooja for Nagadevathas. Mondays, Saturdays and Pradosha days, Mandala - Makaravilakku season (Dhanu 1 to Makaram 5) and Ramayanam month (Karkkidakam) are also important here.

To have a Golden Flag mast in the temple is the long cherished wish of the devotees. The temple authorities are trying to install a Golden Dwaja infront of the temple before the 50th Vigraha Darsana Day (2009 July 14). Kindly donate to the Swarna Dwaja Nirmana Fund.

If you have any aditional information/photo of this temple, please mail to kottayamtemples@yahoo.com